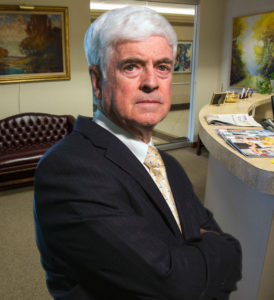 John V. O’Connor has served the citizens of Kenosha, Wisconsin, for more than 35 years, representing them in serious personal injury and complex civil litigation cases. He is well-known and well-respected as an aggressive and dedicated trial attorney throughout the three-county area.

John is a well-respected and very successful lawyer in Kenosha and one who was named a “Super Lawyer.” Super Lawyers are named based on peer recognition and professional achievement. This high honor is given to the top 5% of attorneys.

John O’Connor is the youngest lawyer in Kenosha history to receive an ” A” rating from Martindale Hubbell. John has kept that rating since 1984. He has also received an AV Preeminent* rating from Martindale-Hubbell, the highest rating an attorney can receive from his peers, and he has been named among the top 100 trial lawyers in Wisconsin by the National Trial Lawyers Association.

“I’m proud of the fact that I have won more civil cases than any other attorney in the three-county area. This record stands only because I am willing to take cases to trial if I can’t settle them in a manner that is in the best interest of my client.”